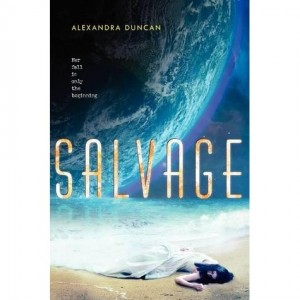 Salvage, by Alexandra Duncan is set in a world hundreds of years in the future where earth isn’t the only inhabited planet. Due to catastrophic flooding on Earth, many humans fled to other planets, beginning the space age. Many colonists also fled into deep space to mine the mineral rich asteroids and planets. On the ships out in deep space males rule and women are treated as objects. Ava, the main character, is a young women living on one of the spaceships. She longs to have kids and can’t wait to marry her crush but right when she thinks everything’s perfect, it all goes wrong. Facing death, she flees from her ship to earth where she sees how humans actually live.

Duncan really swept me away with Salvage!  Normally YA books don’t approach the topic of gender equality but Duncan showed how real the situations are for mistreated women and how what we see isn’t always the truth. The best part of the book was how the author showed everything through Ava’s eyes so realistically; I could imagine myself right there with her. Salvage gave me everything I expected in a sci-fi thriller and more, showing that everyone is equal no matter how different they seem.

For fans of Ender’s Game, and other sci-fi thrillers, Salvage is where it’s at!