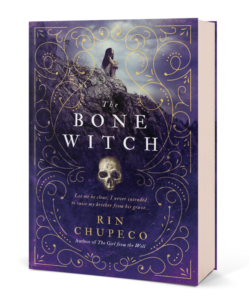 From monstrous Daeva to beautiful, fierce Asha, the world of the Bone Witch teems with myth and magic. Tea is a Dark Asha, a Bone Witch, the rarest and most reviled of all the witch-women known as Asha. Born in the village of Knightcross to a family with two low-level witch daughters, Tea was expected to follow in her sister’s footsteps and spend her life helping the village with whatever power she inherited. But when her brother Fox is killed by a monster called a Daeva, everything changed. At his funeral, Tea accidentally raised her brother from the dead, almost killing herself in the process.
Labeled as a Bone Witch, Tea (and Fox) are taken by the Lady Mykaela, one of the last Dark Asha, to the city of Ankyo to begin her training. In Ankyo, Tea will learn to control and use her gift, to sing and dance, and most importantly, how to fight and draw the runes that give an Asha her power. But while the life of an Asha is one filled with beautiful parties, powerful people, and amazing magic, danger lurks in the dark corners of the kingdom. A faction of powerful magic-wielders known as the Faceless hide amongst the normal people, waiting to tear the kingdoms apart; and Daeva rise from their graves only to be slain again by the Dark Asha. But the numbers of the Bone Witches dwindle, and soon Tea must find a way to change the way Dark Asha have lived for thousands of years, lest she lose her own life to it— and drag everyone else down with her.
In this dark and bewitching book, Rin Chupeco weaves a masterful tale of magic and monsters, friendship and betrayal, love and loss. Split between two times and places, Tea’s story is broken at intervals by short glimpses into her future, moments when we see not only who she was, but what she will become. The Bone Witch will draw you deeper into the story with every page, and leave you eager for the sequel.