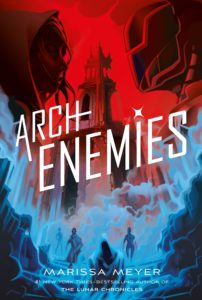 In Renegades Marissa Meyer blurred the lines between hero and villain as Nova began to question whether the Renegades, an organization of superheroes that run her city, are truly as bad as she has always been told. In Archenemies Nova faces a different internal struggle. After the reveal of Agent N, and the council’s plan to destroy the powers of all prodigies that oppose them, she has made her peace with taking down the organization; to her mind it is a necessity. The problem isn’t the Renegades, it’s her teammates. The problem is Adrian Everheart, son of Captain Chromium and the Dread Warden, her best friend and crush that won’t quite believe that Nova’s secret anarchist alter-ego, Nightmare, is truly dead, despite the stunt she pulled off with Ingrid to convince the Renegades. The problem is Ruby and Oscar, her friends who are, despite their proud status as Renegades actually really good people, and the worst problem of all may be her last teammate, Dana, who is becoming increasingly suspicious of Nova.
The stakes have risen for everyone as time grows short and new dangers arise from every side. Nova must find— and steal— Ace’s helmet from the Renegades before the superheroes catch up, while Adrian struggles with keeping his own secret identity— the Sentinel— hidden from his family, and from Nova. Archenemies is an epic sequel that will take you on a wild ride of secrets, betrayal and action and leave you wanting more!