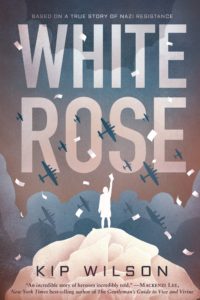 Hope:(n) grounds for believing that something good may happen.
Synonym: This book.
No matter how dark and ugly the world may seem, there will always be those who shine bright just by the goodness in their heart and the strong will to spread that amongst others. Sophie Scholl, and her brother, Hans Scholl, are two such people whose brave lives we embark upon – till the end – in this beautiful poetically written novel.
Sophie was a free-spirited, optimistic girl with high ambitions – but when Hitler’s reign in Germany starts, things took a less positive path for her. Sophie reflects on her life drastically changing from a quiet school-girl to a selfless, radical rebel. Granted she was a German citizen, she was never on the side of violence, or the genocide of an entire group of people (whoever is?), and was against it from the beginning. But this feeling of hatred for Hitler and his actions of mass-murder in the name of Germany, became more prominent when her brothers and boyfriend were sent off to join the army, where youths were losing their lives, just for his thirst for power.
After reading a pamphlet that speaks out against Hitler, Sophie and Hans were driven to do the same, notifying people about the atrocities that are taking place – and encouraging them to stand up against the man – whose words were to make the nation a better place, but his actions proved otherwise.
Albeit not having a happy ending (which is mentioned beforehand), the rebellious stands taken by the young people of that time, is nothing less than a step at ensuring hope amongst readers of all ages – over and over again.
If you want to know what courage, conviction, strength, and finding the good in the ugliest of times means – this book is it…