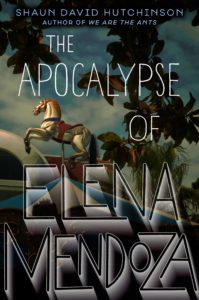 The apocalypse starts at Starbucks. Because of course it does. Elena Mendoza has never been normal. She was born through a virgin birth (proved by a scientist to be the only example of an asexual form of reproduction called parthenogenesis) so depending on who you ask she’s either a miracle or an anomaly. On top of that she has heard inanimate objects speak to her since she was a child. But things really start to get strange when Frankie— the girl she’s had a crush on for literally years— is shot right in front of her, and the Starbucks Siren tells Elena to heal her.
But when Elena does the boy who shot Frankie (and dozens of others across the world) are raptured away in a beam of golden light. From there the book is a wacky rollercoaster of satirical humor, world-altering choices and just a little bit of existential crisis. From cover to cover, The Apocalypse of Elena Mendoza is a hilarious read that has something for everyone.