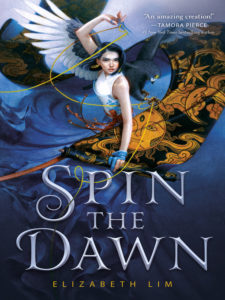 Spin the Dawn, by Elizabeth Lim, is an extraordinary fantasy novel about defeating gender stereotypes, the importance of your craft, and the power of love. Lim tells a beautiful story about Maia, the only daughter of a previously esteemed tailor now living in a small town, who disguises herself
as a boy to compete in a trial to become the next tailor for the emperor.

It is the opportunity of a lifetime, and she attends in disguise, knowing the lethal consequences if her secret gets out. The final challenge is the hardest one, sewing the three gowns made for the goddess Amana: one from the laughter of the sun, one from the tears of the moon, and one from the blood of the stars. Maia always thought these dresses were just a myth, but when she meets some mysterious new characters throughout the trial, her
mind changes. Can she succeed in sewing the three magical dresses and achieve her dream of becoming the best tailor in the land?

Lim crafts a truly amazing story, filled with every element needed for captivating interest throughout the whole thing. With strong themes of magic, adventure, and love, Spin the Dawn is incredibly difficult to put down. Interesting characters, impossible tasks, and blooming romances litter the magical pages. Recommended for anyone who loves sewing, magic, or an amazing story to get attached to. Lim’s sequel to Spin the Dawn will be highly awaited.