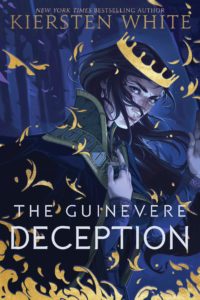 Kierstan White has done it again. She never fails to write a book that doesn’t have you completely indulged. Her usage of old myths and folktales with a twist, has readers diving into a world that is all too familiar, yet refreshing as well. The Guinevere Deception is nothing less, being a continuation of the Arthurian legends after King Arthur defeats the Dark Queen.
Princess Guinevere has come to marry the charismatic, savior of Camelot, King Arthur. However, she’s not there to play wife, but protect him from the dark magic clawing at the kingdom’s borders, and from those who want to see his idyllic city fail – a plan conjured by the great wizard Merlin, who has been banished from Camelot.
However, Guinevere isn’t who everyone thinks of her to be. She’s a changeling, a girl/ witch who has given up everything – even her name, her true identity – to protect Camelot. She has to play the role of Queen, navigating her way through court, and be the woman everyone expects her to be – look pretty and gossip around with all the other ladies. While that sounds fun, she has some bigger problems – such as “how do you use magic to protect the King?” in a city that has banished and eradicated any form of magic. The only other person who knows her true identity and the reason for her arrival is her husband, King Arthur. Throughout her stay in the castle, and everyday a step closer to figuring out who the enemy is, Guinevere ends up forming allies, allies that steer the plot forward. Each character we are introduced to have secrets of their own, intensifying the suspense and the plot.
Filled with magic – good and evil; strong females – who’ve got the beauty and the brains; kings and knights – who are all loyally swoon-worthy; and a battle in which the enemy is the person you’d least expect. This book doesn’t leave any stone unturned, leaving you feeling restless for the next book, and asking one question…When is the next book going to be published???