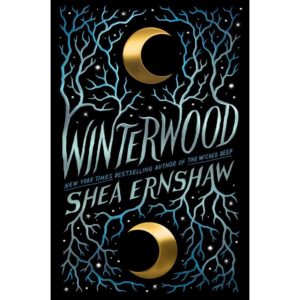 Winterwood by Shea Ernshaw is a blizzard of cold magic and wicked woods. Secrets fill the air, suffocating every breath. Lies and betrayal run deep into the bottomless lake. One boy is missing. One boy is dead.
Nora Walker has lived her whole life in the town of Fir Haven. It is where she was born, it is where she will die. Just like every other Walker before, she was born with nightshade in her blood and shares a strong connection with the woods surrounding her little town. Woods that some say are magical. Cursed, even. Rumored to be a witch and feared by many around her, she finds solace in the woods and the teachings of her ancestors.
During one of her ventures through the woods, she comes upon Oliver Huntsman, the boy who disappeared from the Camp for Wayward Boys weeks ago – and in the middle of the worst snowstorm in years. He should be dead, but he’s alive with no memory of the time he’s been missing. But something’s not right, and Nora knows it. Oliver is hiding something, something that could eventually destroy the feelings she’s come to develop for this mysterious boy. And why is there an uneasy shift in the woods at his presence?
When she discovers that a boy died the same night Oliver went missing, Nora realizes she has no choice but to unearth the truth behind what happened that unfaithful night. With every person
holding secrets of their own, she doesn’t know if anyone is worth trusting. And just how far will someone go to keep their secrets buried…
Ernshaw’s personification of the woods is possibly the best character in the book, the true villain of the story. This book is truly an atmospheric novel. From the spooky forest to the ominous snowstorms – no amount of closing the book will make you feel safe. Readers, be ready to be frightened and try to unravel this mystery that will leave you second-guessing till the very last chapter!