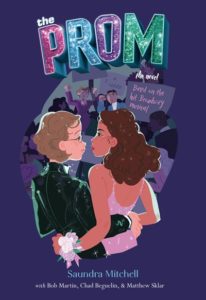 The Prom by Sandra Mitchell (with Bob Martin, Chad Beguelin, and Matthew Sklar) is a heartwarming novel based off on the hit Broadway musical. It tells the story of high school students Emma Nolan and Alyssa Greene, the only lesbian couple in the small town of Edgewater, Indiana. Emma is known to the community as “the gay one.” She is constantly teased, mocked, and stared at by her classmates. She has an online following where she posts her covers of songs. She accidentally-on-purpose hinted at being lesbian on her channel. Her parents found out and kicked her out of the house, so she went to live with her grandma. Alyssa, on the other hand, is the most popular girl at school, head of the student council, and hasn’t yet come out as bisexual to the public. She knows that her mother would flip if she knew of Alyssa’s secret, and doesn’t want to wreck her mother’s fragile mental state or end up like Emma. To everyone else, Emma and Alyssa are best friends. It’s now Emma and Alyssa’s final year of high school, and prom is right around the corner. Emma is holding on to the dream of dancing with Alyssa, but the PTA forbids it. To make it even worse, the head of the PTA and the biggest supporter of an exclusively heterosexual prom is Alyssa’s mother. All Emma wants is to go to prom, so some overly enthusiastic failed Broadway producers enter the scene.  Will Emma and Alyssa get their first dance?

This story was a wonderful modern teenage romance. This book would likely be relatable to many teens growing up in the 21st century. Although the addition of the Broadway publicists didn’t do much to improve the plot, I think Mitchell did an excellent job of making this story relevant and engaging to young adults.

Overall, this book was uplifting and showed the many trials and triumphs of being a young LGBT+  citizen today. I would recommend this book to anyone looking for realistic fiction, romance, and LGBT+ characters.  I would also recommend this to any musical/theater lovers – the musical is great to listen to before, after, or while reading the book! – Sophie Cornish