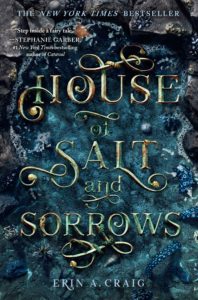 Oh My Gosh!!! I am still not over how obsessively good this book is. Besides being a retelling of the “Twelve Dancing Princesses” – A classic fairytale by the Grimm brothers in which twelve sisters, each more beautiful than the last, dance all night, wearing out their shoes by morning despite being securely locked up in their room by their father – this book is a whole new outlook to the plot with gruesomely horrifying twists and turns, mind games that’ll keep the mind churning, and illustrations that will make your bones chill to the core.
Annaleigh, the fifth oldest among twelve sisters, is now second in line to her father’s inheritance after the deaths of her older sisters – four consecutive deaths, one after the other – the most recent being Eulalie, who plunged to her death from a cliff, when (as rumor has it) she was running off to elope with her lover. However, Annaleigh does not believe that her family is cursed – as believed by the townspeople – but acts of murder by someone who is out to eliminate her and her sisters, one by one. But who? On top of that, the sisters end up discovering a magic door that transports them to wherever they wish to go, allowing them to attend lavish balls and dance with handsome men till their shoes wear out.
When things start to get out of control, with the girls addicted to sneaking out and dancing till sunrise and having no clue on how to find the killer who, as it seems, is now after Annaleigh herself – Annaleigh is just about losing her mind, or so it seems… However, there seems to be a lot of, “Is this real, or not” going in. Determined to find the killer of her sisters, Annaleigh will
do anything to protect and prevent any more of her sisters from sharing the same fate, even at the cost of her own sanity!