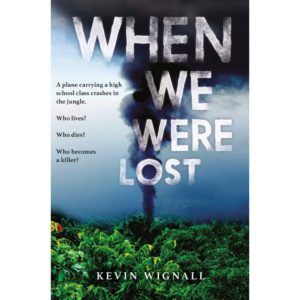 When We Were Lost, by Kevin Wignall, tells the story of a group of high schoolers going on a trip to Costa Rica. The main character, Tom, is a bit of an outsider. He doesn’t have any friends and prefers to be by himself, but he was persuaded to go on the school trip by his teachers and guardian who were concerned about him not being social enough. He set off on the trip not planning on making any new friends, just trying to explore and get it over with. But when the plane crashes in an unknown thicket of wilderness, he is forced to collaborate with his classmates in a duel with the jungle for life or death. He surprisingly comes out of his shell and sees people in a new light. He and his classmates stumble blindly through the dangerous wilderness, just trying to survive, whether it be the breaks in the relationships of the survivors, or the physical challenges within the jungle.
Wignall writes a meaningful story with characters finding themselves in the deep danger but peacefulness of the jungle. Secret talents are showcased, friendships are made, and lives are lost. Tom and his newfound friends discover how truly grateful they are for being alive, and that every little detail matters when it comes to an environment like this. An adventurous journey built for fans of Lord of the Flies, survival stories, and adrenaline-rushing thrills.