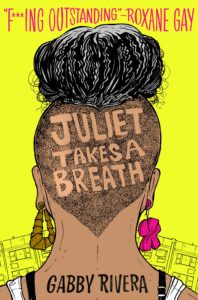 Juliet Takes a Breath by Gabby Rivera was a fun, light, feminist story. The protagonist, Juliet, is gay and Puerto Rican, and the book mainly focuses on her attempts to reconcile those different parts of her identity. Juliet grew up in the Bronx, but by the time the story starts she is in college, and about to start an internship with the author of her favorite book Raging Flower: Empowering Your Pussy by Empowering Your Mind. Juliet mainly faces emotional issues in this book, a lot of them relating to feminism’s traditional whiteness and Juliet’s struggle to reconcile her feminist side with her Puerto Rican side.
The night before Juliet leaves the Bronx, she comes out to her family, to mixed reactions. The very next day, she is on her way to Portland, Oregon, a place so foreign to her, her family can’t remember what city she’s going to. There is a lot of initial culture shock when she reaches her destination. The majority of people are white, the lgbtq+ community is out and proud, and almost everyone is a hippie. There are things Juliet doesn’t like about Portland, and there are things she doesn’t like about the Bronx, and as she compares the two cities, she discovers her identity and what kind of environment she likes to be surrounded by. As you probably could tell, the book is based heavily on setting, which I found unusual and refreshing. The book is also set in 2003, which I thought was an unnecessary and strange choice, since the author didn’t take advantage of the time period at any point in the book. There were so few placing details, in fact, that I forgot the book wasn’t set in the present for the majority of the time I was reading it.
Most of the characters were well-developed and interesting, but most of them were fairly unrealistic. Juliet’s 14-year-old brother reads the Animorph series, which is meant for elementary schoolers. Harlowe, Juliet’s idol, and the author she is interning with, is a hippie to a degree so extreme, it would be near-impossible for a real person to reach it. Other than that, the characters seemed realistic, and almost all of them were a person of color or a member of a minority group. This book was delightfully diverse, with a ton of people of color and lgbtq+ representation.
Juliet Takes a Breath was very contemplative and conversational. Juliet muses on indirect and unintentional racism she experiences in Portland, and whether she can find a sense of community with people who make so many mistakes and seem so inconsiderate. The writing style was unique, almost a train of thought. It was rambling but charming, and fit Juliet’s narrative perfectly. It took a lot of the emotional weight away from the story, so most of the time I was reading it I just felt entertained, which isn’t necessarily a bad thing. It was fun but not life-changing, although I do think this could be a very meaningful book for some people. I think everyone, although especially Latinas, who have recently discovered their sexuality, or are trying to work up the courage to come out could appreciate this book. I would also recommend this book to anyone who wants to learn more about social liberalism or likes reading stories about culture shock. Overall, Juliet Takes a Breath was a fun, though not very deep book, that mostly discussed what it means to balance different aspects of your personality.