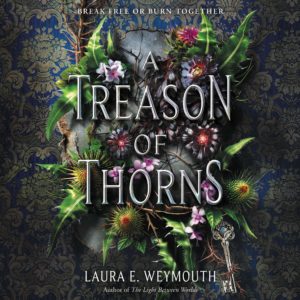 A Treason of Thorns surprised me. I had seen references to it in the past, the premise sounded good, and the cover was pretty— although I am still unsure where the title comes from, but it got my attention, so I suppose it did what it was supposed to. But the point is, it wasn’t high on my TBR. Coming out of a reading slump and bored during quarantine, I picked it up on a whim. I had read the author’s debut novel (The Light Between Worlds), and while I liked it, I wouldn’t have gone out of my way to recommend it to book club, per say. But while The Light Between Worlds was a slow, reflective read, A Treason of Thorns picked up the pace quite nicely. It has a simple but compelling plot, interesting characters and an overarching question about the importance of the roles we choose and the ones that are chosen for us.
A Treason of Thorns is set in what seems to be early post Elizabethan era Britain, although to my remembrance, there were no specified dates. However, in this version of the past, there exists a magical phenomenon known as the Great Houses, magical, sentient estates scattered across the world. In Britain, these houses are bound by magic to the Crown, and their power can only be safely channeled by the caretakers, men and women who live in and love the Great Houses. These caretakers use magical keys in order to use their House’s magic to help the surrounding countryside flourish. This is not a wholly unique premise, but it is unusual enough to still be a novelty, which is an unfortunate rarity in YA fantasy.
Our protagonist and narrator, Violet Sterling (Vi for short), grew up in Burly House, one of the six Great Houses of Britain. Her father, George Sterling, is the caretaker, and is grooming Vi to be his successor. Her mother left when Vi was a child, unable and unwilling to be a part of a family in which Burly House came first, above anything and anyone, and unable to take an unwilling Vi with her. So Vi grows up isolated, with her father often away on caretaker’s business, and her mother starting a second family. Left with Burly House and her father’s ward (and Vi’s best friend), Win, Vi roams the grounds with her house and her playmate, dreaming of the day when she will become caretaker.
But when her father is convicted of treason, and sentenced to house arrest (a cruel punishment that eventually forces the House to kill its caretaker), she loses everything. Her father will not be alive the next time she sees him, Burly House is closed to her until he is dead, and for unknown reasons, her father forced Win to stay behind. Now, seven years later, Vi has been living in the Fens with an old couple who used to work as house and groundskeepers. When she gets the news that her father is dead and Burly has once again opened its gates, Violet makes a deal with the king and races home. But what she finds is nothing like what she remembers. Burly is in pain and disrepair, and Win is distant and in as much of a hurry to leave as she is to return.
This was a fun ride. I probably won’t reread it, but it made for excellent escapism. Weymouth isn’t one for a lot of action, but she is excellent at creating meaningful relationships of various sorts between characters and these relationships and how they are used generate much of the drama and intrigue that keeps you turning pages. All in all, I really enjoyed A Treason of Thorns— it was entertaining and engaging and as I said, it made for great escapism.