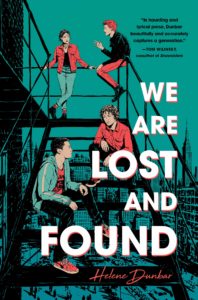 We Are Lost and Found, by Helene Dunbar, explores the dangerous world of being gay in the 1980s, in New York City specifically. Michael, a partially-closeted teenager, lives his life with the same routine: go to school, hang out with his friends James and Becky, go to the club on Friday nights, and
hide the fact that he is gay from his parents so he doesn’t get kicked out of the house like his brother did. He is okay with this repetitive, simple life. But once he finds someone at his favorite club, someone worth giving up his routine for, his outlook changes. He wants more than just school and homophobic parents. He wants to be able to live his life freely without having to worry about the rising AIDS crisis that provides a mystery for everyone, and a blame placed on gay people. Michael is faced with the
menacing decision of staying trapped but safe, or being free and risking it all.
Dunbar writes an incredibly touching story that brings awareness to the struggle of gay people and their discrimination and their constant blame by people looking to make a scapegoat out of them. Michael, and all the other fascinating characters, bring the story of growing up and becoming sexually active in a world bombarded with the AIDS crisis, still new enough for everything about its ways to be a secret except its growing death toll. Michael and the other young people of his time were scared of becoming sick from
any lustful touch, especially one of the same gender. We Are Lost and Found is a beautiful,painful journey of a boy finding himself in a world that is doing everything it can to stop him.