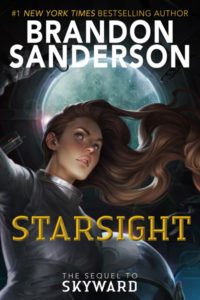 Starsight by Brandon Sanderson is a book in which one can quite literally, get lost in the stars. It unlocks the mystery of the universe with improved technology, aliens galore, and…slugs. What better way to spend an evening than immersed in the chaos and action of a fighter pilot’s story?

Humans are confined on a solitary planet, constantly in battle with the Krell, their jail wardens. Spensa’s always dreamed of becoming a pilot, and now, with her own ship she’s finally making that dream come true. Fighting the Krell is all she’s ever known, but when an opportunity arises to go undercover and infiltrate the very center of the galaxy, she can’t pass it up. Along with her loyal ship, Spensa travels to Starsight, meeting other pilots and allies along the way. She discovers everything she thought she knew (technology, the Krell, humanity) may not be what it seems.

An action-packed plot with a strong female lead, and a talking robot sidekick makes for a book that anyone would want to read. Full of suspense and plot twists, Starsight is made for anyone willing to defy gravity and look beyond the stars, to the true secrets of the galaxy.