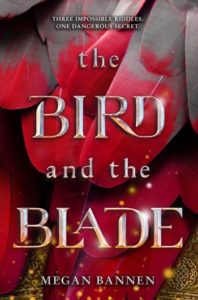 Megan Bannen’s debut novel, The Bird and the Blade is a rich and poignant story of love, loss, and the bloody struggle for power within a fractured Mongol Empire during the 13th century.
Jinghua lost everything on the day the Mongols invaded her home and slaughtered her people. Now she’s a slave in the house of one of the most powerful warlords of their time: Timur Khan, lord of the Kipchak. But when the Kipchak Khanate is invaded and its army destroyed Jinghua must follow Timur and his son Khalaf as they escape their conquered kingdom if she is to have any chance of returning to her own home.
But when Khalaf enters a deadly game to win the hand of a powerful princess, everything changes. Turandokht is treacherous, beautiful, and heir to the Mongol Empire. The man who weds her will be the next Great Khan, the catch? He must first solve three impossible riddles, or die trying. Soon Jinghua is forced to make an impossible choice: betray the boy she has grown to love, or give him up to the princess who would rather be his death than his bride.