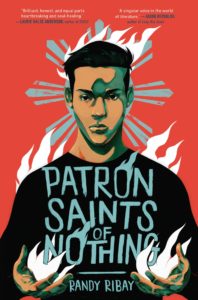 The book Patron Saints of Nothing by by Randy Ribay is about a boy Jay, whose cousin, Jun who lives in the Philippines, is killed by the police for, supposedly, dealing drugs. His family did nothing to acknowledge Jun’s death because he had ran away from home four years earlier. Unable to accept that Jun was a dealer, Jay goes to the Philippines to talk to his family and try to find the truth about what happened to his cousin. He makes friends with a girl, Mia, who decides to help him find out what really happened to Jun. While he is there, his uncle, Jun’s father gets really mad when Jay tries to talk about Jun and sends him to his aunt’s house a day early. His aunt tells him that Jun lived with them for a year after he ran away and, unlike his uncle, actually talks to Jay about Jun. While Jay is there he learns a lot about Jun, both good and bad. He learns the truth while getting his family to let themselves grieve too.
I really enjoyed this book. Though it’s about a heavy topic, it manages to still be a fairly light and easy read. I really like Grace’s character. In the beginning she seems like everyone else in the family, but by the end she admits that she really misses her brother and is upset about it. She is important too because she’s the one pulling the strings, not her father who was suspected.
I would recommend this book to anyone who likes mystery or is dealing with a loss. It’s surprising when it ends and is very unexpected. If someone just lost a family member or friend, I would recommend this book because it can help them understand that you can’t act as if nothing happened, it’s not healthy. You have to let yourself grieve. Also just know that you are not the only one who lost someone. Talking to someone about the person who died can make you feel better.