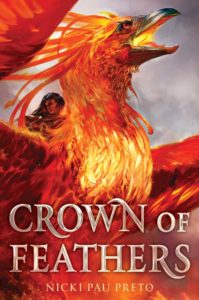 Crown of Feathers by Nicki Paupreto is perfect for those who love fantasy and mystery and suspense. About how even those closest to you might not have the best intentions, and how secrets are sometimes better left untold. Fans of Embers in the Ashes and Three Dark Crowns will love it. A rare fantasy book without romance. In this dystopian world exists people with the power to control and communicate with animals. When two sisters are separated, not just by distance but by emotional connections. When the two sisters find a pair of phoenix eggs and nurse them. But, when it comes time for them to hatch, only one survives and in her anger the older sister kill the phoenix. The younger sister distraught with grief runs away to the resistance. A group of phoenix riders. She disguises herself as a boy and becomes a servant. All while more and more people attempt to overthrow the corrupt government.