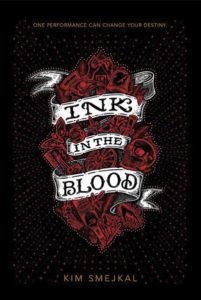 If you ever need transporting to a different world and a different story, Ink In The Blood by Kim Smejkal is the book to do it. This book devoured me from start to finish, fully enveloping me with its whimsical details, strong story line and lovable characters. I couldn’t read fast enough, longing to get to the end but dreading it as well.

Set place in a world in which magical ink exists to channel the Divine’s will, there is only one truth; obey the ink. But what if that truth is based on lies? What if the ink isn’t a force for good and wisdom, but for pain and suffering? Two inklings, Celia and Anya, having experienced the hate the ink is built on, do something that has never been done before: escape. They join the Rabble Mob, a collection of circus like performers that enchant and mystify their audiences, but when one of the members starts acting strange, Celia realizes the Divine has followed them. There lies the greatest truth of all; you can’t escape the ink. Left with no choice, Celia and Anya draft a plot that will destroy the ink forever, but while in process, may destroy them as well.

Ink In The Blood is everything a fantasy novel should be. Kim includes enough explanation of the world and how things work to keep us grounded, while adding elements such as the Rabble Mob to keep an air of mystery and curiosity. Throughout this book I constantly felt wonder, which to me, is one of the most important emotions for a fantasy novel to evoke.

Ink In The Blood is for anybody who wants to be whisked away to another reality full of devils, angels, plague doctors, fire dancers, mimes, inklings, and magic. For anyone who wants to experience adventure and emotion so deep you’d think you were part of the story.