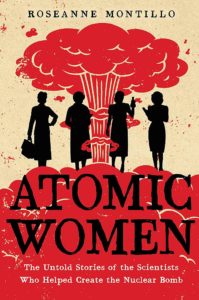 It’s no secret that too often women are not given the credit they deserve. We see it over and over again, in politics, in literature, in business, and especially in math and science. There’s just something about chemical explosions and experimentation, which men like to think women are incapable of participating in. We like to blow things up too! Atomic Women by Roseanne Montillo finally gives these women a voice.

The book follows the timeline of the creation of the nuclear weapon, starting with Marie Curie, and ending with the many influential women involved in Los Alamos. Roseanne tells the story of these women and their lives work, showing candidly the struggle and difficulty they faced during a time when women in science were a rarity. It’s eye opening to see the amount of work these women contributed, without any recognition…until now.

Atomic Women is a book that should be read by all, in order to finally recognize and appreciate the great contributions of these women to science. I recommend for anyone wishing to become more educated about the creation of nuclear weapons, as well as their rightful creators.