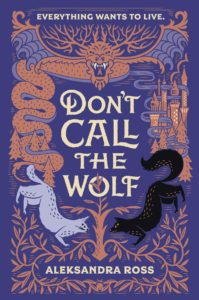 Don’t Call the Wolf, by Aleksandra Ross tells the breathtaking story of Lukasz, a famous Wolf-Lord who kills monsters and dragons for a living, and Ren, the young queen of the forest who’s half-lynx, half-human. Lukasz was once one of ten Wolf-Lords. The brothers were an unstoppable team. But one by one, they all got called back to their home in the Mountains by a familiar tug for the same reason: to kill the Golden Dragon. After Lukasz’s last remaining brother, Franciszek, leaves for the Mountains, he realizes he must kill the dragon to continue his brothers’ legacy and hopefully find Franciszek. He meets Ren in her magnificent fury, and a spark erupts. She tells him that the dragon is destroying her forest and the animals she rules over. The two of them form a promise: she will help him find his brother, and he will slay the dragon. They embark on a long journey filled with colorful characters, littered with monsters, and brimming with magic.
Ross writes this incredibly complex tale with plot twists and dangerous fight scenes jumping off the pages, while devotion and romance fill the chapters. The vocabulary is composed of Polish and European pronunciations and spellings for added character. Don’t Call the Wolf is a perfect story for any classic YA lovers; it’s packed with adventure, magic, imagination, and fantasy, with a smattering of romance.