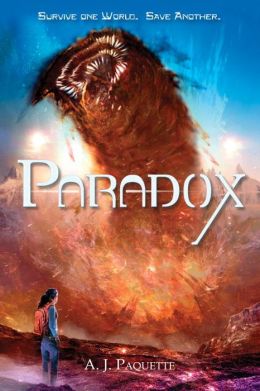 When I set out to read Paradox, I wasn’t entirely sure what to expect. All the cover could tell me is that it involved a girl who couldn’t remember herself and a giant worm. And indeed it did involve this, and a whole lot more.

Paradox is about Ana, a girl who has no memory of her past and wakes up on an alien planet, Paradox, with a pack full of survival gear, a high tech watch equipped with a map and a timer counting down, and instructions to reach a certain point before the timer reached zero. Zero means sunsmeet, the violent and deadly reaction when the two suns of Paradox cross paths. But something isn’t quite right on Paradox; Ana keeps getting odd glimpses of memory, the companions she finds seem to know more than they claim, and all the while, a giant alien worm bent on devouring them follows them across this supposedly uninhabited planet. The very landscape seems to warp as her companions are killed off in mysterious ways, and when sunsmeet happens… well, I won’t spoil the twist, but I can assure you, it is big.

Paradox was definitely an interesting read, but it felt disconnected and scattered at times.
It’s a long time, more than halfway through the book, before certain things that didn’t make sense in the beginning start to tie in, and it was in a way didn’t mesh well with me. The lost memory device I find is a little overused, and though it does make sense in the context of the book, I still found it jarring when Ana had a revelation in the style of “Oh, that totally makes sense because I just remembered that it did.” However, I still did enjoy the book. I was enraptured by the vivid descriptions of this alien landscape and compelled to keep reading to find out what would happen to Ana next, what she would discover.

If you’re looking for a quick read with a sci-fi/mystery flavor, I’d definitely recommend you have a look!