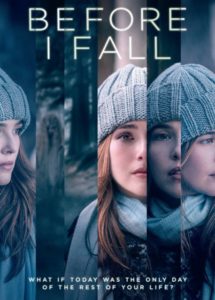 Before I Fall follows the life of a senior girl in high school, Samantha Kingston. She and her three friends are some of the most popular girls in school. Samantha has it all, perfect boyfriend, three supporting best friends, everything any teenage girl could hope for. Everything was perfect until February 12th. Samantha and her three friends attend a party and make a drunken mistake, resulting in Samantha’s death. However, instead of going to heaven or hell or whatever, Samantha relives February 12th seven times. Through these seven repeats she uncovers secrets about her death She uncovers secrets about everything and everyone close to her. How much will she risk to save her own life?

The book started off rather slow and a little too cliche for my tastes. Oliver portrayed high school in a very stereotypical way and Samantha as a character was very unlikeable to start off. Her and her friends were catty and rude and I was sick and tired of hearing the character complain about trivial things such as spilt coffee. However, I am no quitter as a reader and so I pulled through. And boy, am I glad I did. The story started picking up, hitting its climax in the most amazing way. Samantha changed as a character and the reader could see clear as day the character development. She changed from a snotty teenage brat to a sophisticated human being who slowly uncovered the secret to life. The secret to really living life and not just gliding by it. Samantha began treating people differently and making new risks that popular Samantha Kingston would’ve never made in the first chapter.
The last two or so chapters kept me totally captivated, I was unable to set the book down. Flipping page after page new secrets were uncovered and Samantha turned into someone that the reader should aspire to be. Samantha was on a mission, a mission to not only save others but to also save herself. The ending to the story left me with a full feeling. I did feel like crying, if not more than just a tear or two.
Samantha Kingston was a one layered character that, personally, I did not connect to at all. She was unlikeable, and for good reason. However, Oliver used her writing skills to change the reader’s mind, and instead we fell in love with Samantha Kingston and her selflessness and her constant need to save herself. Because, in the end, Samantha really did save herself.
This was the first book I have ever read by Lauren Oliver and I think it was a good introduction into her writing. She uses a lot of metaphors and similes, which when you first start reading feels a little weird and out of place. However, adjusting yourself to her writing really helps you connect with Oliver’s characters and in turn makes you feel many new emotions. Personally, I really enjoyed her writing and I felt myself attracted to the way she described things in new ways, even trivial things.

Overall, as a fellow reader, I would say pull through. Pull through the first two or three chapters because it gets better. It gets much much better and if you start the book and don’t finish you will surely regret it. I promise.
If you enjoyed the following books I think you will enjoy Before I Fall:
Thirteen Reasons Why by Jay Asher
If I Stay by Gayle Forman
The Lovely Bones by Alice Sebold