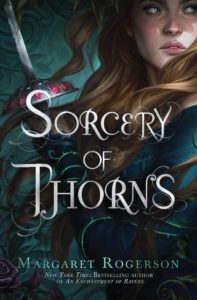 “For these were not ordinary books the libraries kept. They were knowledge, given life. Wisdom, given voice. They sang when starlight streamed through the library’s windows. They felt pain and suffered heartbreak. Sometimes they were sinister, grotesque–but so was the world outside. And that made the world no less worth fighting for, because wherever there was darkness, there was also so much light.”
MAGICAL. BOOKS. Has there ever been a more perfect book for bookworms?
What can be better than being raised in a library – in a world full of magic and sorcerers. A world where books (or grimoires ), not only talk and sing but can also turn into demons or as they’re fondly called Maleficits. And Elizabeth – our clumsy, yet fiercely brave protagonist – lives just that life (lucky her).
Elizabeth just wants to become a warden in the library where she’s lived her whole life and stay as far away from sorcery as she can. But when the director is killed and she’s accused of being behind it, despite being guiltless, she is sent off to the city where an act of heroism (or so she thought) by her, spins her into a web of dark magic, demons, and a mission with her world and everyone she loves at stake. Add in a handsome, witty sorcerer named Nathaniel Thorn and his yellow-eyed servant/sidekick/best friend Silas – it’s a rollercoaster ride full of romance, humor, and a whole lot of trying to keep out and away from magic and trouble, but failing miserably at it.

Albeit a slow start, the book quickly has you hooked. The writing is top-notch. The plot, the wonderfully developed characters, the beautiful and magical illustrations – will have you wanting to jump into the book then and there. This book is a must read for fans of Harry Potter and Septimus Heap .