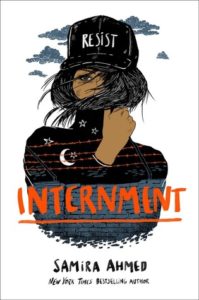 “What’s that thing people always say about history? Unless we know our history, we’re doomed to repeat it? Never forget? Isn’t that the lesson? But we always forget. Forgetting is in the American grain.”
Set in a world where Islamophobia is the latest epidemic. A world where the Muslims of America are the new Jews of Germany, where internment camps are real and fascism has reigns on the government. A world so grim, it’s hard to imagine it happening but powerful enough to create an impact on the present generation into perceiving what is and can happen.
Internment is a dystopian fiction that follows the story of Layla – a 17-year old whose entire life changes instantly, after she, along with her parents are forced to evacuate their home in L.A. and are brought to — along with several hundred muslims — to an internment camp called ‘Mobius’. There they are told that they are to create a community built on, “Unity. Security. Prosperity.” (the irony of this motto will be hard to digest from the very first page)
But Layla is not in the mood to stick around, plastering a fake smile and act as if everything is just fine. Her resistment in accepting to build a “normal life” while living in a heavily guarded community barbed with electrifying fences a.k.a prison, is what builds the plot. Her unwavering determination for wanting and going against odds to acquire the freedom promised as a citizen of America heightens the incentive factors of the book.
From her Yemeni-Jewish boyfriend, David to her progressive Muslim parents to her newly acquainted friends (and enemies) at the camp – the characters are all interesting and help in equalizing the light and dark parts of the book. Unfortunately, we don’t get to read anything about the other characters – where they came from or who they are, besides Layla’s perception (or specifically, her thoughts) on them which I found to be a tad-bit disappointing. Because many of the characters who played important roles in the book ended up becoming a mystery with no background, making it hard to really decipher what to make of them.
Albeit the missing pieces here and there, the book does its job of instilling fear within a reader – not the fear you hate but the fear you learn from. This story had to be told and i’m glad Samira Ahmed went along to write this book based on her fear and comprehension of what’s been going on for the last couple of years – pointing out the prejudices based on race and religion.
Until we don’t learn from our history, there’s no saying it won’t repeat itself, no matter how confident one may be…