Lie to Me, by Kaitlin Ward, is a mysterious story about a high schooler named Amelia who fell into a river and is now seen as the extremely clumsy girl. She was dangerously close to death, but her friend found her stuck in a tree with a broken arm and a concussion. After Amelia got out of the hospital, she thought about the incident a lot. Her mind took a dark turn because her gut kept telling her that her fall wasn’t an accident. Was someone trying to 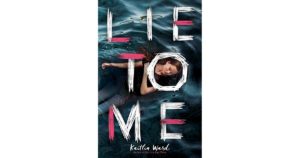 kill her? Why would they do that? While her best friend Sky, her brother Hunter, and her new boyfriend Liam all obsess over her health, Amelia tries to figure out who did this to her. She learns new things about herself and about the people she surrounds herself with. The mystery and suspense of not knowing is difficult for her, and she becomes distrusting and suspicious of everyone in her life– despite how much it hurts to not be able to count on the people she loves.
Ward writes a realistic and heartbreaking story about the scary happenings of teenagers and small towns. Filled with enough normalcy to keep you on your toes in real life and enough twists to keep you guessing, Lie to Me is a short and powerful read that shows how important trust and instinct are.