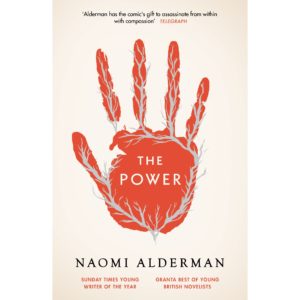 Let me preface this review by saying that this is not a YA book. However, as an older teen, I think that it is a perfect book for someone transitioning out of YA, as I myself am. It must also be said that it has trigger warnings for violence and sexual assault. If these statements do not exclude you from potential readership, please do read this book. The Power by Naomi Alderman is epic, terrifying, unflinchingly honest and utterly brilliant. I am of the firm opinion that it should be read by everyone.
Let’s rewind a little. The premise is simple: one day, girls and young women start exhibiting the strange new ability to generate shocks like electric eels. These girls are able to wake up the same power in older women (there is a scientific explanation for this, so the book falls firmly into sci-fi rather than fantasy). Suddenly, with women holding an inherent biological advantage over men, the balance of power in the world shifts. It starts slow, a woman winning an important election in America, a new branch of religion with the Holy Mother at its center growing in popularity from South Carolina. It spreads and strengthens from there. Revolutions are built off of women banding together to use their newfound power to change the world they live in. But what starts off as a fight for equality, for autonomy, soon tips too far.
The Power follows four point of view characters, Margot, an American politician; Roxy, the illegitimate daughter of a British crime boss; Allie, a foster care kid turned religious leader who hears a voice a la Joan of Arc; and Tunde, an aspiring photojournalist who captures one of the first scrap of footage of the power being used. Together, the four protagonists— I hesitate to call any of them heroes— let the reader follow the slow progression of different parts of society as the world changes. The characters themselves have amazing development— although admittedly not always for the better. While some of the characters develop into what you might call heroes, others continue past that, and change from victims to heroes to oppressors. The hard part is that you care about all of them, even as you are horrified by their actions, and herein lies Alderman’s strength: she writes about humanity. She writes flawed, complicated, scarred characters that you care about because they feel inherently real, even if sometimes you can’t like them as people. But she also understands the relationships between those people, the different dynamics in groups and cultures and as a result, her book feels terrifyingly plausible.
If that wasn’t enough, it is also an excellent novel. The Power is often compared to Margaret Atwood’s The Handmaid’s Tale, but I would argue that Alderman’s book is superior, for the simple reason that it is more easily readable. I personally think that Handmaid’s Tale, while an important book and a fascinating culture study, wasn’t written in a way that people could read it easily, especially those who don’t read very much. The plot was meandering, the main character was complacent, and her understanding of the world was negligible. While I understand while Atwood chose to write it as she did, I was simply not invested in the story other than academically. The Power, however had an engaging plot, captivating characters, and an excellent study of the world we live in today.