Hi! I’m a student at Scotts Valley High School who loves to read. Some of my other interests include acting, eating, and sleeping. I can often be found with my friends and family, watching YouTube videos, or convincing myself that my Hogwarts letter just got lost in the mail (it’s still coming, okay? Good things come to those who wait!). 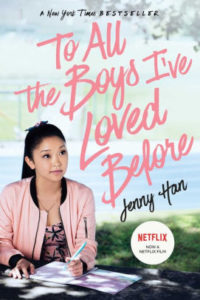 Maybe you have seen the current buzz about Netflix’s latest movie, To All the Boys I’ve Loved Before. However, most people do not know that this movie was based on a book of the same name! To All the Boys I’ve Loved Before is actually part of a trilogy written by the fantastic Jenny Han. This book is one of my all-time favorite because of its wonderful characters, great plot and writing, and representation.
This story’s fantastic plot had me finishing the book within the day I picked it up. The concept of the love letters is pure genius, and the originality of the idea pulled me in and kept me engaged. Han put a fun spin on the classic love triangle, and the deft writing allows the story to be fresh and interesting rather than clichéd. The story is wholesome without being boring, and endearing without being sickly sweet. Han’s writing has a general warm and homey mood to it, which in turn strengthens Lara Jean’s character.
As soon as I read the first page, I instantly fell in love with the protagonist, Lara Jean Song Covey. Lara Jean is one of the most kind, caring, and warm-hearted characters I have ever read about. I admire her sweet nature and her love for her family. She truly values those that are close to her, and will be there to support them. Peter Kavinsky was the next character that I enjoyed reading about. He has this almost childish air about him, and his charisma easily charms any reader. He is playful and easygoing when with his peers, and he enjoys living in the moment and appreciating the little things. With his confidence and big heart, it is no wonder that he is such a beloved character. Kitty Song Covey was the last character that I loved getting to know. Her humor provides an excellent source of comic relief among the drama, and she adds so much to her family and to the story. She always has something clever to say and makes the dynamic between the characters more fun and lighthearted.
Furthermore, this book is one of my absolute favorites because of its representation. The story is centered on a teenage Korean-American girl, whose sisters and mother are also Korean. Although I am not Korean myself, I am Chinese and therefore Asian. I rarely see stories (books, movies, television shows, or otherwise) that star Asian leads and Asian stories. Seeing an Asian girl on a book cover made me feel incredibly overjoyed because I was able to see myself in the book I was reading. Reading this book helped me understand why representation matters so much, and it is because representation tells people that their stories matter and do not hold less importance than others.
I highly recommend reading this book and seeing the adaptation on Netflix (this post is not sponsored; I just really enjoyed the movie). Not only would you be reading and watching a cute love story unfold, you would be supporting representation of thousands of people who are finally seeing themselves in books and movies. Please go support this amazing work of literature, as well as the equally amazing Asian representation!

What to Say Next is abo

ut two teens in high school finding their way to truth. The novel features dual narration from the two main characters Kit Lowell and David Drucker. Kit, a usually outgoing girl, is struggling to make sense of her world with her father’s recent death. She befriends David, a frank and relatively lonely person. David lacks in social skills as a result of his autism, but is eager to have a friend. They bond quickly, becoming closer friends and finding comfort in each other’s company. Kit asks David to help her uncover the mystery of her dad’s car accident, but their friendship is put to the test when they reach the truth.

Throughout the novel, the characterization is well developed and strengthens the writing. David starts off as an intelligent and analytical character, and is hard to relate to because of his unique perspective on the world. He does not have many social skills, and is further separated from his peers due to his label as a “retard”. The tone and diction of his chapters illustrate his rational mind, and it’s clear that he needs certainty. Later, he becomes more relatable and is not defined by labels. He is truly seen as a person instead of a stereotypical misunderstood teen.

Additionally, the hierarchy of typical high schools is pointed out to be unfair and biased. When David defends himself from the foot, the principal suggests moving him to another school. Instead of removing the bullies from the situation, the victim is targeted and told to start over at another school. Principal Hoch is valuing the football stars, and trying to protect them rather than David. She is unjustly perpetuating the high school hierarchy and labeling people. She even refuses to hear David’s side of the story, and does not care about his several death threats. This focuses on the harmful effects of valuing certain individuals over others, and using damaging labels without seeing beyond them. It leads to the people on top becoming complacent, and the people at the bottom being confined to their labels and unable to safely be themselves.

Ultimately, What to Say Next explores important themes of identity and friendship. I would rate it a ⅘ stars, and would recommend it to anyone interested. Thank you so much to Bookshop SC for providing me with the opportunity to read and review this ARC, and I can’t wait to read the final published copy in July.-Genevieve B