The romance in this book is what really hooked me, because the chemistry between the main characters was quite lovely. I had a difficult time putting this story down because I simply needed a satisfactory conclusion (or, more accurately, I needed the romance to fully develop). The plot was also creative and intriguing, bringing a neat yet emotionally resonant end to the series. The author really did a nice job explaining Ren’s (the protagonist’s) emotions throughout the book. That being said, I would have liked to see a little bit more of her character growth towards the end of the book. Throughout both Incendiary and Illusionary Ren runs from group to group, always feeling like she doesn’t belong. Instead of confronting this problem, at the end of the book she tries to run away again, which to me felt unsatisfactory.

The book is also a bit intense at times, with scenes of violence and torture, so I recommend readers take that into account. That being said, I really did enjoy Incendiary, and would recommend it to anyone who loves YA fantasy and romance novels.

Three, actually. Too bad Mami missed them all.”

Talk about grabbing attention from the get go. This book was extremely difficult to put down from start to finish. An emotional rollercoaster in the best way possible, it had me alternating between laughter and tears (and alternatively, excitement and anger) practically every chapter. What stuck out to me most, however, was the bare honesty of the protagonist; the story felt achingly real and vivid. And, of course, the author’s use of humorous dialogue and witty sarcasm was wonderfully entertaining.

The book follows the story of an (almost) graduated high school senior who attempts to complete her last graduation requirement with a summer work-study. Somehow in the process she becomes entrenched in years-old family and romantic drama, all circulating around a sequence of disastrous quinceñeras. I would (and am planning on) reading it again. 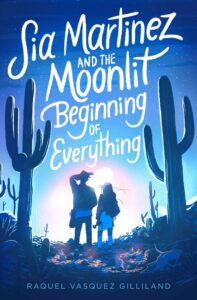 Sia Martinez and the Moonlit Beginning of Everything is a fantastically unique novel. From dealing with intense themes to exploring extraterrestrial life, this book seems to have it all. Not to mention the wonderful smattering of romance. In fact, it’s got so many different facets, I don’t really feel comfortable describing it as just a “sci fi” novel. If anything, it’s more like a coming-of-age-romance-YA-science-fiction story. Of course, the multitudes of concepts are a bit hard to keep up with at times. But overall, it has a very interesting combination of ideas and genres.

The story follows 17-year-old Sia, a Mexican American struggling to overcome the unfairness of her mother’s deportation and subsequent death. But this reality may not be exactly as it seems. When visiting her favorite spot in the desert– the place her family considers the beginning of the world– Sia spots mysterious lights flashing across the starry sky. At first dismissing them as nothing, Sia begins spotting them again and again, until finally she sees it: a triangular UFO, burning through the desert sky. Aliens. This discovery, of course, changes Sia’s entire world as she seeks to find out the truth and what it means for her and her family.

I loved the authenticity of this novel, which, despite it being a science fiction novel, felt more like realistic fiction than anything else (except for the aliens of course). The book is infused with beautiful creation stories, gorgeous imagery, and just a hint of magic. I’d recommend it to anyone who is looking for a heartfelt and unique novel. 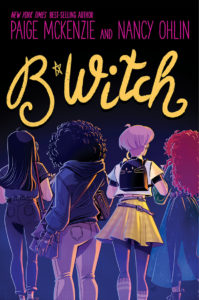 B Witch represents the intrigue of a murder mystery and the imagination of a fantasy world all rolled into one spellbinding story– both literally and figuratively since the book is about witchcraft! The novel takes place in a town called Sorrow Point, where a new student is forced to keep her identity as a witch secret because of her country’s anti-magic laws and the emergence of a violent, witch-hating group known as the Antima. Luckily, she discovers she is not the only witch at school. In fact, there are two rival covens who are actually competing with each other to get her to join their side. When one of their fellow witches is murdered, however, the covens are forced to desist from their feuding and join together to uncover who the killer is, before they become the next victims.

This book is both quirky and charming, making it a quick read that was both short and sweet. The plot is a little slow to start off, with most of the novel seeming to be exposition until the end when more of the action occurred, which I found to be the part of the book where I was truly hooked. It also took me a while to get adjusted to some of the language and writing choices, like the use of texting abbreviations in place of phrases like “in real life” and the fact that one character uses Pokemon cards to perform magic. Once I got used to it, however, the language choices just made the book seem almost relatable to its teen audience, and even more relevant to our own world, even though it’s technically a fantasy novel.

I’d recommend B Witch to fans of Pretty Little Liars and to anyone who loves fantastical settings, charming female protagonists, or high school drama mixed in with a whole lot of magic. 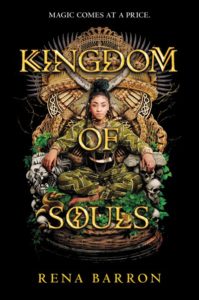 Arrah should be one of the most powerful witch doctors in both the tribal lands and the capital city of Tamar, born to the heir to the great, magical Aatiri clan and the High Priestess of the kingdom. Instead, she was born without the ability to control any magic. To make matters worse, she can see it– twisting and sparkling, but always just outside of her grasp. Arrah desperately wishes for powers, if only to ease the disappointment of her mother, who is almost always emotionless and severely critical. Arrah’s only chance to control magic is to trade years of her life, which would make her old before her time, a visible marker of the hated charlatans. When children from her village start disappearing without a trace, however, she may be forced to use the dangerous magic, especially once she suspects the work of the terrifying and murderous Demon King. Arrah uses everything she has to fight against the actions of the Demon King and his cohorts, putting herself in danger with desperate attempts to stop the destruction and save her father, her friends, and her kingdom.

This book, Kingdom of Souls by Rena Barron, epitomizes the perfect balance between a fantastical setting, action based plot, and lovable characters. Rooted in the cultural beliefs of her West African ancestors, Barron’s world of witchdoctors and Orishas (magical deities) is vividly displayed through sensory descriptions of the setting, be it the smell of roasting peanuts in the marketplace or the grandiose sight of the temples in the city. In reading this book, I really enjoyed the setting and the creativity of the story, but felt like the plot became a bit too convoluted and confusing towards the end. It was difficult to follow, partially because of the number of plot twists and some of the incomplete explanations of many of the major events, including the deaths and subsequent reincarnations of many characters. Still, I enjoyed reading the book, and would recommend it to anyone who like creative fantasy settings, strong female characters, or the writing of Tomi Adeyemi (who wrote Children of Blood and Bone).